I, Kirill Yelistratov, and human rights activist Elena Grebenyuk appeal to all our friends who live beyond the borders of Russia with a request to propagate this article on the English-language resources. On the political persecution of Igor Stenin need to know not only in Russia.
Political prisoner Igor Stenin subjected to unprecedented pressure in a Russian prison. The guards try to break their will to resist. We hope that the publicity will help the release of our comrade.
Freedom for all political prisoners! Freedom Igor Stenin! 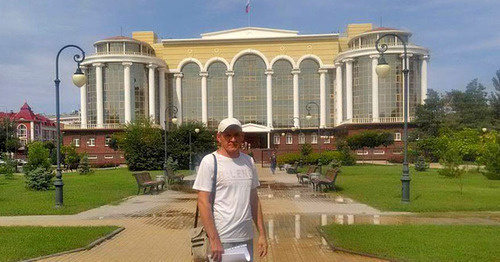 The "Caucasian Knot" has reported that Igor Stenin was accused of reposting, in the social network "VKontakte", an extremist article about the war in Ukraine. On May 16 this year, Igor Stenin was sentenced to two years in a colony-settlement; and on July 28, the Regional Court upheld the verdict.

On June 9, the Human Rights Centre (HRC) "Memorial" called the criminal proceedings against Igor Stenin politically motivated. In the course of the consideration of the appeal filed against the sentence, experts reported that the text for which Igor Stenin was sentenced was posted by another Internet user as a comment.

"The verdict was appealed against by my advocate and myself," Igor Stenin told the "Caucasian Knot" correspondent in his comment on the decision to lodge an appeal complaint against the verdict.

Igor Stenin insists that the extremist article in the group "Russians of Astrakhan" in the social network "VKontakte" was attached by the user "Sergey Romanov", who commented on one of Stenin's posts; and one of screenshots in the case files was edited by investigators.

The cassation complaint states that the original record, which was added by the user "Sergey Romanov" to the Igor Stenin's post, is on the user's page in the Facebook social network.

"However, reposts of materials and comments among two social networks, Facebook and 'VKontakte', are impossible. This fact was confirmed by the experts, invited to the session of the appellate instance. This fact is confirmed by materials of the case," said Igor Stenin.

Full text of the article is available on the Russian page of 24/7 Internet agency ‘Caucasian Knot’.